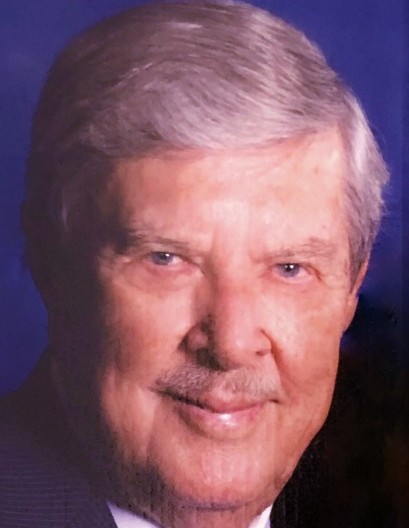 Born and reared in New Athens, Illinois, Clyde’s freshman year of college during 1942 was interrupted by his induction notice into the U.S. Army.   After attending the Army’s Specialized Training Program at Harvard University, he was sent overseas, landing directly from New York Harbor onto Utah Beach in August of 1944.  There he began seeing extensive combat action as a Squad Leader in the 26th Infantry Division of General George S. Patton’s Third Army.  During the infamous Battle of the Bulge in December of 1944, Clyde was wounded and evacuated to London, England where he convalesced until being returned to the U.S. in March of 1945.  After receiving additional medical treatment at Fort Sam Houston, Clyde was discharged from the Army on his 21st birthday, August 1, 1945.  Clyde was awarded the Combat Infantry Badge and a Bronze Star, among other medals.  Clyde next enrolled at Washington University in St. Louis, where he later graduated in 1948 with a B.S. degree in Civil Engineering.  After meeting the love of his life, Lila, they married and together raised their three sons in Belleville.  Clyde had a successful career as a civil engineer, retiring in 1986 as the Superintendent of Highways for St. Clair County.  Clyde & Lila then enjoyed a long and happy retirement in Bradenton Florida, and later in Waterloo Illinois.

Clyde was a proud and active member of the St. Louis Gateway Chapter of the Veterans of the Battle of the Bulge, where he served as its Secretary, and in earlier years was an active member of both the Elks and Freemasons.  Clyde enjoyed many hobbies including playing the accordion and bowling, but during his retirement years he enjoyed golf most of all and achieved two milestones which his family and friends often heard about:  a hole-in-one and “scoring his age” when he was 78.  Clyde & Lila worshiped our Lord and Savior with fellow congregants at the Concord Presbyterian Church in Waterloo.  Always positive, ever cheerful and with a kind word for all he met, Clyde will be greatly missed and mourned by his family and his many friends.

In lieu of flowers, please consider a gift to the Gateway Chapter of the Veterans of the Battle of the Bulge, Shriner’s Hospital for Children in St. Louis, or Concord Presbyterian Church  PCA - Waterloo, IL.

A private burial will be held at Jefferson Barracks National Cemetery in St. Louis County on Monday, March 4.

To order memorial trees or send flowers to the family in memory of Clyde J. Erb, please visit our flower store.