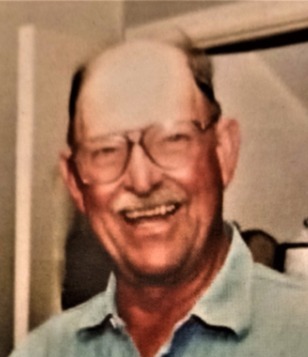 As was his way, Earl Dean Downs passed quietly into heaven on Thursday evening, Dec 15, 2022 at home at age 94. He was preceded in death by his wife of 64 years, LaJoy Beck Downs, whom he has missed for 8 years.
He is survived by his children, Michael (Carol) Downs, Stephanie Brandt, Julie Downs and Lisa (Richard) Thibeault; grandchildren, Erik (Ellen) Brandt, Adam (Jessica) Brandt, Megan Brandt, Joshua (Lindsi) Downs and Paul Thibeault; and great grandchildren, Emelia Posey, Elizabeth Joy and Ewan Gunner Brandt and Jackson Dylan and Addison Rae Downs as well as nieces, nephews and numerous cousins.
Earl was born May 17, 1928 in St. John’s, IL where he had a reputation of being a bit of a rascal. That changed when he met LaJoy Beck of Pinckneyville, IL; they were married on Sept 24 th , 1950 before Earl left for the US Army. While in Korea, he was wounded twice for which he received two Purple Hearts. After returning home, the family lived briefly in Troy and Millstadt, IL before moving with the first three of their children to Waterloo in 1959 into the only home they ever owned. There they expanded their family by one and both remained until death.
Earl was a member of Immanuel Lutheran Church where his lovely tenor voice was heard for decades, despite his insistence he could not sing. He worked for Union Electric for 30 years as a union welder, a very dirty job that he loved because of the guys he worked with, so many of whom were family friends for years. He enjoyed golf and fishing with many of these coworkers, but genuinely enjoyed his time with them at work as well…as his many stories revealed. After retirement, he was hired as the Waterloo Park District Superintendent, another job he loved for several years, before retiring for good. At that point, he became the handyman around his house as well as for his children in town.
Earl loved his wife, his family, his friends and, above all, his Savior. His confession of faith was heard in his final days; he was ready and waiting on the Lord. His faithfulness has been rewarded! Praise the Lord!

As an expression of sympathy the family prefers memorial contributions to:
Immanuel Lutheran Church or Hospice of Southern Illinois

A Memorial Service will be held at a later date.

To order memorial trees or send flowers to the family in memory of Earl D. Downs, please visit our flower store.