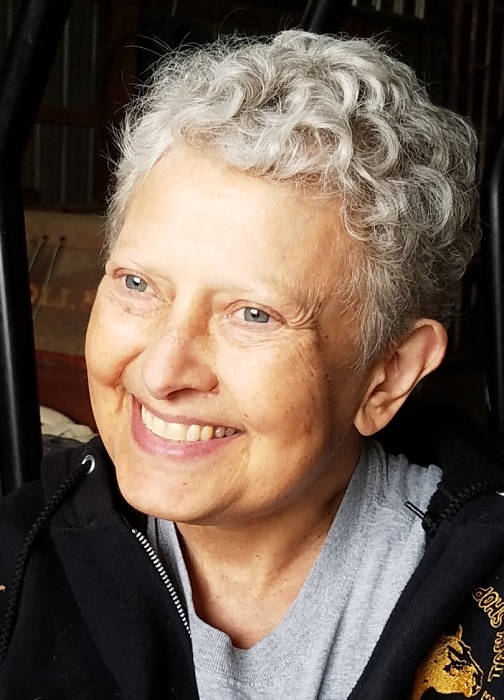 Patricia Ann "Pat" Rick, nee Pokojski, age 55 of Waterloo IL, passed away peacefully at 2:44 PM on Sunday, December 17, 2017 at Barnes Hospital in St Louis, MO surrounded by her devastated family.  She had fought an exhausting battle with cancer that could not rob her of her beautiful smile or crush her happy personality.  She was an inspiration to all of us in how to deal with the adversity that life can throw at you.  She brought out the best in people and we are all better for having known her.

Pat was born on March 31, 1962 in Belleville, Illinois to Edward and Della (Nettles) Pokojski and was named Patricia in honor of St Patrick.   She grew up in Mascoutah IL and attended Holy Childhood Catholic Grade School and Mascoutah High School.  Pat thoroughly enjoyed her childhood and often reminisced of spending hours playing with friends, having sleepovers, listening to her dad play his steel guitar with his buddies at home or at public dances, barbecuing, camping, fishing, riding horses and water skiing.  Her only complaint growing up was that she was not allowed to keep a horse in the coal shed in the back yard.

Pat worked at the Mascoutah Pizza Hut while still in high school where, one day in May 1979, she waited on her future husband, Mitchell Rick.  Five months later, when he was between girlfriends, he recalled her sweet smile and fun personality and decided to find her.  He was able to get Pat’s name from the manager based on his impersonation of Pat saying “Hi!”  Fortunately, she was between boyfriends at the time and they formally met on October 27, 1979 at the St Libory IL Legion Hall through mutual friends.  Pat and Mitch were married on October 30, 1982 at Holy Childhood Catholic Church in Mascoutah Il.  Together they lived in St Libory IL, Carbondale IL, New Athens IL, Belleville IL and finally Waterloo IL for the last 20 years.

Pat worked in the business office of the Belleville New Democrat for several years before moving to Carbondale IL.  There she worked at The Printing Plant many long hours to support the couple while Mitchell pursued his engineering degree.  She worked at Ernst and Whinney in St Louis after Mitchell graduated until she became a new mom with the birth of Victoria.  She then worked as a full time stay at home mom and had Katie followed by James.  Needing a break from three kids all day, she began work at Fischer’s Restaurant in Belleville in the evenings as a hostess.  Once the children were all in school, she went to work for Nester Realty as an agent and eventually, the secretary for the Columbia IL office.

Pat enjoyed baking all sorts of good things and made the best pie crust period!  She would can enough vegetables and jellies to get the family through the winter and the kids would take the excess to college in later years jokingly referring to the cellar as the supermarket. She was very creative with quilting and sewing and many of the dresses the girls wore to school dances were handmade.  Although her father had a green thumb, she always said it seemed to have skipped a generation with her, but that never stopped her from trying to grow all kinds of flowers.  Pat also loved the outdoors. She once hiked across the Grand Canyon and loved hiking long trails to waterfalls or scenic views that were off the beaten path.  Playing fetch with the dogs, whipping around on her zero turn mowing the grass, working in the garden, baling straw and hay for her horses, and riding the horses on the trails through the woods around her home all made her happy.  Her horses were her babies and she could spend hours grooming them.  She was especially happy fishing and holds the current record for largest fish from our pond.

Pat was athletic as well, continuing to water ski into her 50s until her illness made that impossible.  She taught all three kids to water ski and had many fun hours skiing and tubing with her family.  She played sand volleyball with her children and their friends against teams half her age.  Everybody on her team called her “Mom” and the other teams would frequently ask “How many kids do you have?” Most of all, Pat enjoyed dancing.  She and Mitchell went to dances often and always brought the children along.  She passed a love for dance on to her children and taught them all to be good dancers and they in turn have been passing that love on to their friends.

Pat loved the different holidays during the year and always had the house decorated for the holiday for that month.  She claimed St Patrick’s Day as her own and spent the day with family and friends celebrating.  She used to say, “I’m Pat Rick, but I’m no Saint”. As the kids got older, she got creative with Easter by using challenges from “Survivor” (her favorite TV show) instead of simple Easter Egg hunts.  Halloween always found her getting a group together and dressing as a theme such as “The ADDAMS Family” or the rock band “KISS” and she generally won any of the prize money offered.  Naturally, the costumes would be hand crafted.  Christmas was always the biggie.  Pat had a tree in every room (even small trees in the bathrooms) and would place over 250 nutcrackers throughout the house.  She enjoyed many hours at yard sales collecting items to be used as decorations.

To order memorial trees or send flowers to the family in memory of Patricia Ann "Pat" Rick, please visit our flower store.