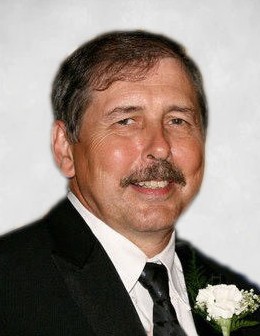 Ron was a graduate of Waterloo High School. He was a skilled machinist, working for Dynegy Power Plant in Baldwin, IL where he was a proud member of IBEW Local 51.  He retired after 34 years with the company in 2012.

He enjoyed running; placing in and winning many regional races in his lifetime. Ron also loved the outdoors, including camping, boating down at Lake Kinkaid and enjoying a cold one by the camp fire.  He always had a passion for working in his garage, listening to KSHE, and re-building muscle cars including his beloved 68 Corvette.  With his tight knit group of friends, he traveled to several NASCAR raceways around the country to experience life in the fast lane.  Ron had a unique talent for finding a bargain, often discovering “new” treasures at auctions and giving them his signature Ron touch.  Even with all of his hobbies he always made time to help his friends and family with various projects.

His favorite thing to do was to spend time with family and friends.  He is survived by Vickie Jaeger, his wife of 18 years, daughters, Maria (Frank) Kellner of Skokie, IL and Emily (Andrew) Twigg of O’Fallon, IL and step daughters Lacy (Brian Hummert) Barban of Barnhart, MO and Tracy (James) Maul of Columbia, IL,  Mother Marie (Charlie) Smitt of Dupo, IL, siblings, Rich Jaeger of Waterloo, IL and Kathy Dixon of Red Bud, IL, many cousins, nieces, nephews, brothers and sisters in-laws and several close friends.  Ron’s greatest joy in life was being a Papa to his grandkids: Rylie, Julia, Ava, Claire & Wesley.  He is proceeded in death by his father, Leo Jaeger of Waterloo, IL and brother in law Charlie Dixon.

Visitation:
10 AM until time of service Tuesday, November 13, 2018 at Quernheim Funeral Home

To order memorial trees or send flowers to the family in memory of Ronald E. Jaeger, please visit our flower store.