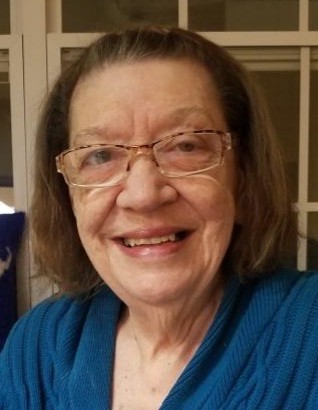 Shirley Marie Cook, nee Floerke, 79, passed away Tuesday, December 22, 2020 at the Townsend Family Care Dementia Unit in Wilton, IA. She had been diagnosed with Alzheimer’s in 2016. She was the daughter of Elmer and Alida Floerke (nee Buss) and was born in Waterloo, IL on October 28, 1941.

Shirley graduated top of her class at Sts. Peter and Paul Catholic High School in 1959.  After which she married and spent several years living in Albuquerque, NM and Tallahassee, FL. When she moved back to Waterloo, she worked as the Bookkeeper at Gibault Catholic High School for almost 30 years.  And was a parishioner at Sts. Peter and Paul Catholic Church.
Shirley enjoyed traveling, bingo, yard sales, antiques, fishing, playing card and trivia games, and was an avid fan of the St. Louis Cardinals. More than anything, she loved her family. She raised her children to be strong, positive, independent thinkers.  She is survived by her children: son Chuck Cook of St. Peters, MO, daughters Cynthia (Daniel) Speed of Wilton, IA, Constance (Mark) Eddy of Prairie Village, KS, and Kimberly (Juston) Sitzman of Evansville, IN, and her 16 grandchildren and 8 great-grandchildren: Heather (Charles) Passe (nee Lochhead) and their sons Cooper and Jude of Houston, TX, Amanda Lochhead and her daughters Kallie and Harper of Katy, TX, Kelsey Speed and son Easton of Wilton, IA, Cayla (Joel) Ketelsen (nee Speed) and their sons Avett and Kit of North Liberty, IA, Megan (Robby) Brandes (nee Cook) and their son Eli of O’Fallon, MO, Riley Speed of Wilton, IA, Rachel Cook of St. Peters, MO, Sarah Lochhead of Chester, IL, Hallie, Brynna and Joshua Speed of Wilton, IA, Ashley, Tristan and Tucker Eddy of Prairie Village, KS and Chase and Sawyer Sitzman of Evanville, IN.  She is also survived by a brother Robert Floerke of Waterloo.

She was preceded in death by her parents, her daughter Cheryl Lochhead, and her brothers Roy Floerke, Jim Floerke and David Floerke.

To order memorial trees or send flowers to the family in memory of Shirley Marie Cook, please visit our flower store.