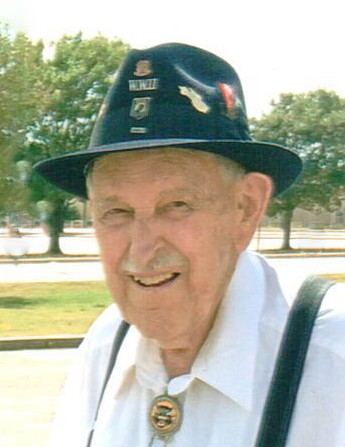 William B. Oettle, 91, of Waterloo, IL, died November 5, 2017, in St. Louis, MO. He was born March 28, 1926, in Hardin, IL.
He is survived by his wife Edith Golden Oettle, nee Jones; children Rita (Bob) Basinger, Lannie (Jean) Oettle, Gregory Oettle, Joe (Diane) Oettle, Terry (Marilyn) Oettle, and Bryan (Vickie) Oettle; 12 grandchildren; 15 great grandchildren.
He is preceded in death by his parents Philip W. & Emalie V. (nee Miller) Oettle; 3 sisters, Hester Simon of Hamburg, IL, Viola Merz of St. Louis, & Alvera (Sam) Oettle of Hardin; and 3 brothers, Harry and Art Oettle of Hardin, & Merle of Bethalto, IL.
Bill grew up in Calhoun County and attended school in Hardin. He entered military service June 22, 1944 and fought with the 805th. "Hellcat" Tank Destroyer Battalion in Northern Italy during World War Two and was discharged May 13, 1946. He received the American Theater Medal, the European African Middle Eastern Theater Ribbon with two Bronze Battle Stars for two major campaigns; the Appenine Mts. and the Po Valley. The Good Conduct Medal, the Victory medal, the Occupation Medal of Germany which served for Italy also, and he was recommended for the Bronze Star Medal.
William married Edith Golden Jones at Piggott, Arkansas August 28, 1948. After he was married he completed High School as a World War 2 Veteran attending class with the regular students. Then he attended college for five years and was an educator, and he taught school twenty eight years and retired from the Waterloo Community School Dist. No. 5 in 1981. Then Bill and his wife raised a fruit orchard and grew a large melon and truck patch each year until the tornado of 1995 wiped them out.
Mr. Oettle was a pioneer in establishing the Baptist Mission at Prairie du Rocher, IL and was a charter member of the First Baptist Church there. he was also song leader, Sunday school Superintendent and did many other duties. Later he was music director at the First Baptist Church in Waterloo. He was a member of the Monroe County Education Association, the Illinois Education Assn. and the NEA. He was a life member of the VFW Post 6504 at Waterloo, and a life member of the American Legion Post 636 at Hardin, IL.
He was a member of the WWII 805th. Tank Destroyer Bn. Assn., a member of the WWII National Tank Destroyer Assn., a member of the Fort Benning WWII Tank Destroyer Assn., the WWII National Tank Destroyer Society Assn. in which he was Secretary-Tresurer, 1st Vice President, President from 2001-2005 and continued to be Vice President until his death. These organizations erected a large Tank Destroyer Monument at Fort Hood, TX in 1983, one at Fort Benning, GA in 1995, two at Fort Knox, KY, and one at Fort Sill, OK in 1997. This was done so that posterity would not forget the elite group of soldiers that fought to destroy Hitler's heavy tanks. Also when Bill was President of the WWII National Tank Destroyer Society, he re-dedicated the large 22,000 LB TD Monument at Fort Hood, TX, dedicated a new Tank Destroyer Monument at Fort Hood and was instrumental in dedicating a new Memorial Park there Nov. 11, 2004. He also helped to build a huge monument, The Armored Forces Memorial on Memorial Drive "Avenue of Heroes" at Arlington, VA.
Bill already donated his legacy of work to the Calhoun County Historical Society at Hardin, IL. Bill was also a member of the Calhoun County Historical Society at Hardin, and the Military Museum of Southern New England at Danbury, CT for some time.
His favorite hymn is Amazing Grace and his special military song is "Caissons Go Rolling Along" because that's a field artillery song and the Tank Destroyer Force was sometimes used as such.

To order memorial trees or send flowers to the family in memory of William B. Oettle, please visit our flower store.